It is undeniable that society is divided into factions that can have a good or bad effect. These divisions leave people to work on themselves and strive, believing that a hierarchy exists in society. Even in ancient times, these already exist and, true enough, had helped the chief or king manage their own land. In modern times now, the partition of society, although not explicitly implied, still exists. People are often classified within a certain group of people or practice—ethnicity, religion, birth origin. Generalities keep people on fences and sometimes lead to discrimination which they need to fight as time goes on.

Battling over society’s stereotypes had been tiring for most people. Constantly breaking fences that limit specific groups on doing things and proving to everyone that everyone is capable of it is a true challenge. There are standards to meet and expectations to break. These aren’t limited to the society itself but breaks itself into private sectors of the society—workplace, in friendships, and most of all, in the family. These stereotypes had also created gender roles that had been a touchy subject for people. Gender roles are specified ways that society had set for a specific gender. Some examples are women are expected to cook, clean, and be subservient to males, while males are expected to provide and work themselves up for their own families. In truth, these are life roles that everyone must have to be set on to life.

MC Clay’s protagonist in A Sword of Greed and Envy would make us realize a life role. Lark Kravinoff is a strong, brave woman that everyone will admire despite their gender. Being raised in a world of survival, she had learned to rise above all the factions in the fictional world that MC Clay had created. Readers who love dystopian or fantasy novels will admire the story about Lark and the creature he will find as an ally and partner. This is a fast-paced novel full of twists and turns and will inspire people to start fighting against those dividing society. A Sword of Greed and Envy is filled with adventure, romance, and motivation. The protagonists’ adventures would impact readers not to live by anyone’s definition and never limit themselves because of society’s conceptions. 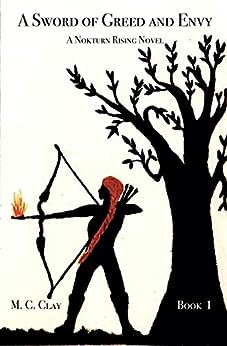 Hard is to live in a world where definitions are set before people even grow up. It is exhausting and would make people rely their worth on society. People need to learn to start removing themselves from the world’s definition, even if little by little. It is an important skill to have for people to maximize their abilities, a skill that would help a person in life and inspire others to grow.

A girl in a village doing alright, Vienne grew up fascinated by the power of words and the worlds they create. Her creations are dedicated to serve, encourage, and revitalize a person’s drive. Her free time is usually spent writing poems and stories that come up in her mind. Just as literature did for her, she wishes to motivate and help people realize their own sparks.